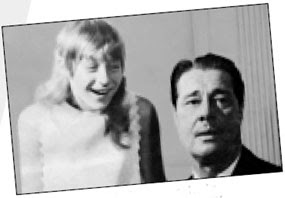 For many on here, especially those new to this blog, Neva Small, if she is known to you at all, is remembered for her wonderful performance as Chava in the 1971 film version of "Fiddler On The Roof."  What many don't know was that she was a child actress, who started out on the New York stage, and is Lenny Bernstein's goddaughter.  (Yes, dears, THAT Lenny Bernstein!!!!!!!!) She is featured on the Original Cast recording of his "Mass."

But, long before that, what consolidated Neva's status as a Legend Of The Musical Stage, was her extremely plaintive, yearning rendition of "I Wonder How It Is," from the musical "Henry, Sweet Henry," which is a story in itself.  Nunnally Johnson, the screenwriter, had a daughter, Nora, who wrote a novel called "The World Of Henry Orient,"" in which a rather mediocre concert pianist of that name is followed around New York City by two adoring teen-age fans, girls in private school.  One, Valerie Boyd, is from a broken, unstable family, the other, Marian Gilbert, was from a more stable environment.  On screen, Tippy Walker and Merrie Spaeth (who became a Republican!!!!!!!!  Can you believe it????????) played Val and Gil, as they are called.  The film cast wasn't bad--Peter Sellers, Angela Lansbury, Paula Prentiss--all A-Listers!

When it came time to adapt the book to the Broadway musical stage, Bob Merrill, who had scored big with "Funny Girl," was hired to write the entire score. Which he did.  The cast was A-list too--Don Ameche, in the title role, Neva as Gil, a then unknown girl, named Alice Playten, and the one who was expected to emerge from this show a star, like Barbra Streisand, in "Funny Girl"--Robin Wilson, as Val!!!!!!!!!  Who?  You might say. Exactly. The story of went wrong with Robin and the show is the stuff of show business. But let me also add that the chorus of school girls was backed by the likes of Pia Zadora, (who was Neva's understudy) Baayork Lee, and Priscilla Lopez. The show was directed by the film's director, George Roy Hill, but what gave it some musical theater cachet was that it was choreographed by Michael Bennett, who brought in some of his dancers, like Baayork and Priscilla.  Eight years later, they would go on to make musical theater history.  I don't think I have to tell you in what.

Upon "Henry Sweet Henry's " arrival, at the Palace Theatre, on October 23, 1967, it was the most highly anticipated show of the just starting season, the show expected to be this big, star-making hit.  But things went awry.  Though she had an excellent voice, Robin Wilson did not become a star as Val, because, first, she was playing a part she was too old for, and wasn't able to pull it off, and her voice was not distinctive enough.  Neva's, however, had distinction to spare, and when Bob Merrill wrote "I Wonder How It Is" for her, and she sang it, she became his favorite; he went on to create a role for her in another flop show, "The Prince Of Grand Street," (which I don't think made it to Broadway!!!!!!!!) because her voice was just so extraordinary. As you shall soon hear.

The other unexpected thing that happened to 'Henry' was Alice Playten. In the very beefed up role of school brat Lillian Kafritz, with two songs, "Nobody Steps On Kafritz," and "Poor Little Person," she stopped the show, wowed the critics, and earned herself the show's only Tony nomination.  As a sage said, at the time. "She never stopped anything out of town.  Her numbers never went so well as they did on opening night.  It needed a gathering of New York faggots, to love her special brand of camp!"

You better believe it, honey!  And, at the time, Alice released a two sided single of "Poor Little Person" on one side; the title tune on the other.  It was the latter that caught my intention, and its infectious melody I began singing, until I was bugging my parents to see the show.  They promised they would take me after the first of the year, but guess what? The show closed on December 31, 1967!!!!!!!!!!!! 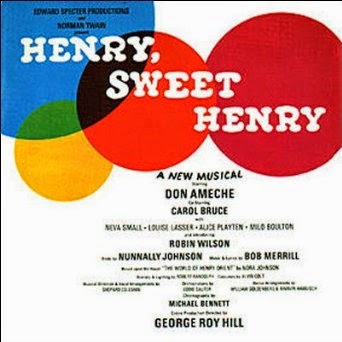 Now, before you hear the song, let me talk about it and Neva.  Notice how the waltz strings segue into flutes, which give the tune an adolescent sound. Notice how Neva starts, yearningly and quietly, but then builds, so when the music goes with her, and she gets to "Sometimes I just visualize....." she achieves a state of almost adolescent orgasm that no one has been able to duplicate, though I come close, being that Neva and I have birthdays a day apart, hers on the 17th of November, mine on the 18th. Neva is also two years older.  Maybe I should have played Val??????????

I still have some explaining to do. Before you listen to this, I want you to close your eyes, so that you only see Neva.  This is Neva's voice from the album, but it is some ersatz queen, named Bruce Bossard, who married some guy, and got their wedding in The Times--lip synching Neva!  The nerve!  If he was 15 years old, this might be charming, but at his age???????  Come on, hon!

Of the three--Peter Sellers, Angela Lansbury, Paula Prentiss--only Sellers was truly A-list in movies (since you referenced them appearing in one). Lansbury obviously A-list in theater.


Jimmy,
I agree with you. Though Lansbury
did film, even earned two Oscar
nominations, she was never billed
above the title. Peter Sellers
was. Angela's stature came later
in life, and from the stage. Isaw
her in the "Gypsy" revival, the
"Mame" revival, and, of course
"Sweeney Todd."